Living in a Tiny Home

A place for everything and everything in it’s place never rang more true than at the home of my last client. I was lucky enough to have been asked to help her get her tiny home back in order after, like so many other clients, a series of unfortunate events befell her.

After being laid off her last job in the oil and gas industry, she decided to go visit her mother in Colorado; making the most of the time off and taking the trip while she was still financially able. One week into the trip and my client broke her ankle! Her short visit ended up being months of surgeries and physical therapy.

As a single woman without anyone at home to care for her, she stayed with her mom. An adventure for anyone who hasn’t lived with a parent in decades, the relationship was certainly tested on many levels, but prevailed and was stronger in the end.

When it came time to return back home, nearly 8 months later, she was faced with the literal mess she had left behind that 14 hour work days tends to create. Did I mention that she lives in a travel trailer? Less than 200 sq. feet of living space means limited space and any mess is a big mess, and in her case messes where everywhere.  Most of my customers simply shut the door on a room or space with a big mess, but in this case she couldn’t do that, perhaps that was the impetus for the Colorado trip… 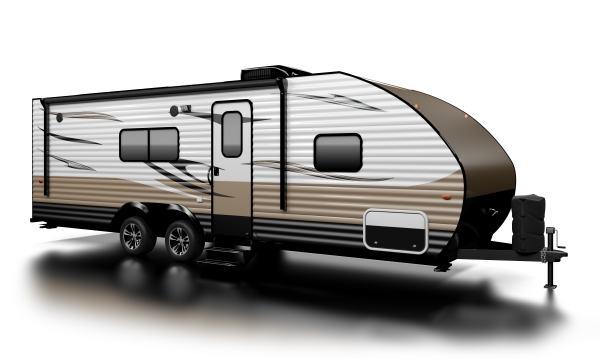 Tiny living you can take on the road!

After being back home for a month and getting nowhere fast in terms of cleaning up, she was now only sleeping on half of the bed because the other half became consumed by clothes. She decided it was time to bring in some reinforcements to get it done once and for all and move on with her life. This job, more than any other job I’ve worked, was one of accountability. I was there so she’d get it done. Unable to get it done on her own, she felt stuck and was totally unmotivated. She became depressed. She needed motivation, encouragement and support. (Three of my favorite things to provide.)

I’ve never worked in a trailer before, and was looking forward to having a new experience. It was definitely that. For three days we worked together untangling her home. She knew there were lots of clothes to get rid of and I was her cheering squad as she made tough decisions. I was impressed with her determination as she visibly struggled with making decisions that she knew had to make. She had a finite amount of storage space for her clothes, and absolutely had to scale back. There was just no other way.

I have said to clients in the past “you can’t make your space grow, you only have the space you have and if you can’t get everything to fit, then you will need to scale back.” This experience put that concept in a whole new light. She had a tiny little closet  – about 6 feet across and only 3 feet of hanging space because the other 3 feet had shelves. There were three 24” x 15”x 10” drawers and four  14”x14”x6” drawers. That’s it. Everything she would wear would have to fit into those spaces. There was just nowhere else for them to go. 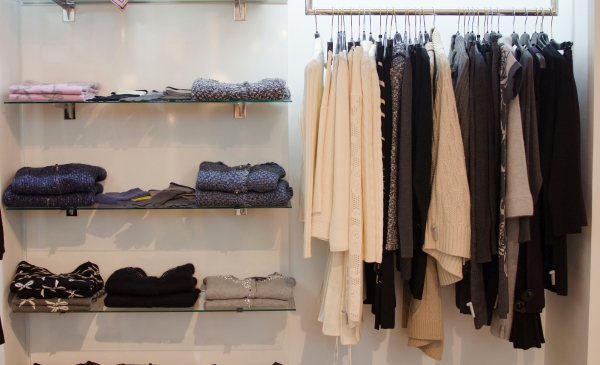 Could you survive on this much closet space?

On the first day she sorted through the clothes on the floor and bed of her tiny bedroom  – only 7’ x 9’ with a queen sized bed and very little walking space). She filled two trash bags of dirty clothes and took those to get cleaned (“dirty” just mean on the floor). That made enough room to go through and purge  the clean clothes. Two trash bags of donations left from that. Later we repeated the process when the newly laundered clothes returned, because they would definitely not all fit, and one trash bag left after we were finished. How amazing is that?!

She took multiple “mental breaks” to regroup and catch her breath before pressing on. Together we hung a spice rack, and cleaned spills and leaks that had occurred in the time she was away. We reconfigured wires and put items in the “underbelly” (the outside compartments). We evicted all the spiders that had come to inhabit her home while she was away. We spruced up. We went through stacks of papers, weeded out items that she just didn’t need anymore, and put away items she wanted to keep.

What impressed me more than anything else was how organized she was. I know that sounds funny considering she hired an organizer to help her, but she didn’t hire me to organize her as much as motivate her. She was already organized. Everything already had a very specific place, and she knew precisely where everything went. And most everything had a trick to getting it out and putting it away. She has to go through multiple steps for nearly everything and has been doing so for many years. A mission of mine when I organize is to limit the number of steps it will take to retrieve or put something away, but in the case of living in a tiny space, that isn’t an option. If you want it, you must be willing to go through the steps to retrieve it and put it away, however many that takes.

In a tiny place, there is no room for frivolity, only essentials. That’s not to say she didn’t have any superfluous items but only a few. Regular purging is essential in a tiny space. For simplicity and sanity it’s wise to adhere to the rule “only keep that which you love”.

I was happy to have been able to share a few organizing tips to a woman who for 7 years had lived a minimalist life and was used to living with less. We rolled some items and refolded others to allow many more to fit in a drawer. I was also able to illuminate the benefit of disposing old electronics boxes and unnecessary documentation. This alone freed up quite a bit of valuable space. In this way, I felt like I made a contribution to the organization of her home, after all I’ve never not been hired for my organizing skills and was having some withdrawals!

It was truly a unique experience that I will not forget anytime soon. I was reminded of the times in my life where I had only one room to live in and how very specific and organized those were. I was happy and content in those spaces and never “wanted” more. Living with less can be a blessing and force you to be very intentional about what you allow to occupy your valuable space.

Those who live in tiny homes serve as a reminder for others that have more space. That living with less; living intentionally, keeping only that which you love, means surrounding yourself with things you love. Imagine what that must be like. I think it would be fantastic. Everything around you would bring you joy. How amazing would that be?

Maureen is owner and Chief Organizer with Katy Home Organizer. A lifetime of organization and experiences have honed her organizing skills into a repeatable formula. She approaches each day with a positive outlook on life and compassion for those that struggle with disorganization.