Wow. What an epic event we all just went through. I think this will go down in history as The Great Harvey Flood. I am still in shock about the magnitude of the whole thing. The breadth and scope of it all is mind blowing. If you are in the Houston region, I sincerely hope that you and your home were spared the wrath of Harvey and the flooding. If you were adversely affected by Harvey, or are still in the thick of it, my heart goes out to you.

For me, all thoughts about organizing and going to work have been out the window the past week, but as I turn my attention back to my business, I began wondering if this event made you reflect on the amount of stuff you (still) have? I know it has for one of my clients. I checked up on her this morning by text. Her goal, now more than ever before is to go minimal. She is re-evaluating ALL of her stuff – what she has and why she has it – with a new set of eyes.

Her reaction to this epic event prompted me to want to share my Harvey experience with you and something I realized.

I live in Katy, Texas and from Sunday night through early Tuesday morning our home was threatened with high flood waters because the bayou was over it’s banks. Sunday at 11pm we decided it was time to start moving things upstairs. I knew this was a possibility and honestly it did not stress me out one bit. Over the past several years of being an organizer, our family has significantly scaled back on what we own to just what we really need. There is little “fluff” or unnecessary stuff and it wasn’t until I was faced with moving the downstairs to the upstairs that I truly came to appreciate that condition. Don’t get me wrong, I have plenty of “wants”, but I am not weighed down by them. The most important things were our photos and keepsakes which were already boxed up in plastic bins under the stairs. 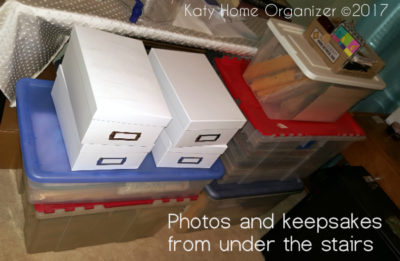 Everything that could go up, made it up the stairs safely within an hour. Our minimalistic lifestyle made it possible to accommodate most of what needed to come upstairs and still have room to move around easily. Only a few things were left to chance downstairs (like the couch I wanted to replace anyway!)

In the end the water literally came within an inch of crossing the threshold but the downstairs was spared.

Once the threat of flooding is passed, we will need to put everything away, which will take a bit longer than an hour I am certain, but even that will not be too daunting. Everything has a place and I had very recently “tightened up” everything downstairs so it was all pretty much in order before Harvey came to town.

My realization: Once again organization has made life simpler. Even a crazy, unexpected, epic, catastrophic event like Harvey was made a little easier to cope with because our home was organized and minimal to start. What could have been a frantic dash to throw everything upstairs instead was a methodical transition from the downstairs to upstairs, and back again. What a blessing.

Maureen is owner and Chief Organizer with Katy Home Organizer. A lifetime of organization and experiences have honed her organizing skills into a repeatable formula. She approaches each day with a positive outlook on life and compassion for those that struggle with disorganization.