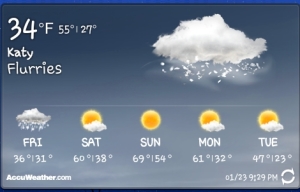 This past 7 days were kinda crazy in our house, and it’s been because of the weather.

Last week it was business as usual and then the news came that Thursday a cold front was blowing in, and Friday it might snow. What?! I am not a big fan of cold weather; it’s no mistake that I live in a warmer climate, so alterations to my plans for the next 36 hours needed to be made. As much as possible I like to stay out of the cold, and so do my hands.

Friday’s job was to be organizing a garage with an elderly woman, so I knew that wasn’t going to fly with either one of us, so I rescheduled that. Next, I decided to rearrange my schedule to prepare for the Home & Garden Show I was to be a part that weekend. Instead of waiting until Friday afternoon to bring everything in, I changed my schedule to utilize my son and his friend after school Thursday. After school we got the bulky/heavy items into the venue and then headed home. I planned to set up on Friday since I would have plenty of time now that my job was rescheduled.

Sometime that evening, we learned that school was to be closed Friday. If any of you have kids of any age, you know that this indeed affected my day, and the condition of my home. I knew things would have been disheveled anyway due to the preparations of the H&G Show, and they certainly were, now with an additional day off with He-Who-Makes-Great-Messes, the weekend messiness began a day early, and with no free time to keep up with it, by Monday the house was a wreck.

Mondays are my regular day to go around the house and tidy up. I work most Saturdays, so I take Mondays off to catch up on the domestic stuff. Not this Monday. This Monday I needed to manage the contacts I had made over the weekend and begin following up with them – AND – wouldn’t you know it, another snow day was in the forecast for Tuesday. HA!! Mondays are also my normal day to go grocery shopping, so I went. Sometimes I can put it off, but I knew I would NOT want to be outside Tuesday, and I wasn’t alone. It was so busy out on the roads and in the store Monday, it was comical. As the day progressed and the prognosis for bad weather increased with each passing hour, and I began wondering if I would make it to my appointments the next day.

Have you ever noticed that drama takes you away from productivity? That’s what was happening here. Happily it was just weather drama and not life drama, but still the energy stirred up by the snowmagedon was slowing down my productivity! Then came the news – no school on Tuesday.

The big storm turned out to be a little spritz of sleet and ice in our area, maybe a couple of snow flakes. Don’t get me wrong, it was COLD, but the road conditions looked to be favorable so I followed through with my scheduled appointments and was gone a portion of the day. The parts of my day I was home, I was focused on following up from the H&G Show, not housework. Mind you, while I was gone, my husband and son were both home.

Then came Wednesday. Finally everyone was out of the house. I was in the position to survey the homestead and found it was quite the disaster. We are not any different that the majority of people. We are humans, we make messes. We are busy humans, and aren’t able to always tidy up after every mess. The way we may differ from most families is that our house is set up in a way that even when chaos breaks out in the home, tending to the aftermath is pretty easy. We don’t have a lot of possessions first of all – just what we need, want and use. Everything has a home, so accumulating piles of random items is unusual. That is the beauty of an organized home. Maintenance of life is easy.

So between snow flurries on Friday, the Home & Garden Show Saturday and Sunday, and then snow-mageddon on Tuesday, my house was pretty well worked over. But while I was cleaning up Wednesday, I came up with this idea for this blog because it really was easy to get it wrangled back in. I got a few more blog ideas as well, but those will be next. Trust me when I say, my house isn’t Better Homes and Gardens perfect, and I am totally ok with that. It’s functional. We can find everything. We aren’t drowning in stuff. We aren’t over-stimulated from things all over the place. That is because – everything has a place, and when things come in, they have a place to go that works.

How did your house fair after snow-mageddon? Are you still trying to pick up the pieces? Maybe what would benefit you better in the long run is to give your home a really good, deep-down organizing overhaul. The first step to any organizing overhaul is purging. Getting rid of whatever you do not use, like, want or need. Start there. If you need any help with that, or any other step, you know where to find me. If you have any questions, feel free to contact me. Answers are free. 🙂

Maureen Guzman is a certified professional organizer who lives in Katy, TX and helps people all over the Houston area from Fulshear to Cypress to Memorial to West U. She and her team are passionate about gently helping people make choices to improve their lives through decluttering and organizing.